Eyy it’s my rebirthday. October 6 is the happiest day of the year for me. The weather’s great, the spaghetti’s good, what an awesome day to be a-l-i-v-e. I even started it on a good note, up from the Hilton Head tennis tournament. That don’t matter much anyway, my hamster could have died yesterday and I’d still be up today.

Whew, what a rough year though. I did a heck of a job hiding it, but year three was definitely the hardest year of my life, let alone post injury. Maybe it’s because I started it off recently coming to terms with the fact I’m about to spend the rest of my life in a chair and won’t ever move my legs again, maybe it’s because nobody likes you when you’re 23, or maybe I’m just salty because I didn’t do too hot on my accounting exam last week.. but it actually really was.

On a much less playful note, I’ve been prettty down this past year. It was bullshit to be honest – straight draining me mentally and emotionally. And physically because I been slacking in the weight room. It wasn’t all bad, it was more like a rollercoaster ride, just not as fun. I’d be counting the days down until I’m rich and famous one week, then feel the lowest I’ve ever felt the next.

Smoke all that though. I’m on a long ride up now. I’m just chillin’ at the front getting cranked up the tallest coaster on Earth – with my Beats on because that noise would drive me nuts. I’ve taken a lot of learning points from those down days…

First and foremost, I’ve been reminded by hearing about and seeing the effects of other tragedies concerning others that were less fortunate than me… that was a mouthful and probably could have been said much simpler, but I got a busy day and I’m typing this inbetween classes… Others that are no longer with us would smack me so hard if I was being a sour puss, which I have been a lot of this past year, big time.

Also, I found out I can still have fun and do exciting things. I got to live a lot this past year – a lot more so than the second year post injury, and a lot a lot more so than the first. I found a snowboarding replacement in monosking, which I’ll for sure be doing some of this winter, as well as every future winter that I’m fortunate enough to be here. And most of all, I found a gymnastics replacement in tennis that I’m very, very stoked about. I also found out that kayaking is pretty rad. The next thing on my radar that I plan on getting into is scuba diving. I’m really excited for some future trips to the Caribbean to swim with sea turtles and horses, and other life found only in the sea. When the time is fitting in year four, I’ll get myself scuba certified and probably an oversized frame for the certificate to obnoxiously and inconveniently cover my nightstand.

Another thing that was bringing me down was my appearance and boundaries caused by the chair. Sitting at 4 ft. tall being constantly looked down on has sparked a lot of insecurities. All I could focus on were my imperfections and the downsides of my chair. The first two years I loved my chair; it was like constantly riding a little bumper car while everyone else had to walk. Instead of having that mentality, I could only think about the limitations that stairs brought me. I despise stairs. Stairs can suck my left and right nuts both raw. The rawness wouldn’t even bother me because I can’t feel them.

The final thing I learned was that down times WILL come. They’re inevitable, but it’s okay because everyone deals with them on occasion. I’m not alone.

Back to tennis for a bit. Tennis doesn’t only bring the excitement in playing tennis. Weekends spent at a tennis tournament are constant reminders of not being alone. Players surround themselves with people from all over the world that are in the same boat, and it’s a wonderful thing. Not everyone there has spinal cord injuries, but most find themselves in a wheelchair every day, and ALL constantly deal with some type of disability. Everyone is also in the same boat mentally. They prioritize athleticism by taking three/four day weekends out of their lives to go play tennis tournaments. They are open about their down thoughts, and help each other surpass them. They enjoy life, and want you to as well.

Quick update on tennis: I played at the U.S. Open in St. Louis, which was incredible because I saw the top two players in the world, who made me want to get into tennis in the first place; Shingo (JPN) and Houdet (FRN). I did not play very well in St. Louis. The only match I won was a singles consolation match, but I had the best experience so far at a tournament. I also played at Hilton Head last weekend. I only played one singles and one doubles match and I lost them both. The singles match was very close; I had match point twice, but it wasn’t my day. I’m finished with tournaments for the season. It was a great first season. I’m glad I moved up to the B division so soon. I learned a ton, and now I’m back to Schroeder for some more strokes.

For now, I’m going to enjoy the rest of this day! Thanks for reading. Year four is gonna be sick. I’m sure of it. 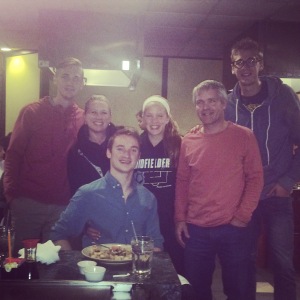 A couple of days ago was the two year anniversary of the accident! My rebirth day! It might seem odd to some people that I get so excited about this day. I’m sure some of you are thinking — It’s the day half of his body was paralyzed, and he was permanently confined to a wheelchair. What the hell is he so happy about? — And yeah, things aren’t perfect. But whatever, I’m making it work, and most importantly, I’m still alive! Alive and well, at that! I have been into Roman Atwood’s Youtube channel lately. He posts videos of himself and his crew carrying out public pranks on the streets of Columbus. His “Gas Prank” video was the first one that I saw, and it had me laughing out loud. The other day, I saw that he uploaded another video. It was titled, “My producer got hit by a truck!” It sounded familiar, so I was sure to check it out. Well some of it. It was really long, so I skipped to the part where he meets his producer at the hospital. He had some road rash and a few broken ribs (also familiar). Then I heard him say that he was hit at 35 mph and thrown 20 feet. Roman made a face, and said, “35 miles per hour? 20 feet??” He immediately talked about how lucky he was to be alive. In the couple of minutes that I watched, I heard him say it about three more times… Okay I have a few things to say about this.

1. He is lucky to be alive! That’s a big hit being thrown 20 feet on the pavement. And if I can say that honestly about him, what does that mean there is to say about me? This example alone should give you a much better idea of why I get so pumped on these anniversaries.

2. The driver that hit me claimed, under oath, that he was traveling at 25 mph. I was thrown 176 feet. It was measured at the scene of the accident. So, that means… wait… According to my T.I. 83 calculator, supposedly, the guy who hit Roman’s producer was traveling at 1.4x the speed that I was hit. Yet, I was thrown 8.8x further… Yeah, something’s telling me that my lawyer and I got had. Big time.

Roman’s video came at the perfect time. It was just a couple of days before my anny, and it reminded me of just how lucky I was/am. I think it helped me better enjoy my day on Monday. Since it wasn’t on the weekend this year, I didn’t throw any parties. The day was pretty laid back, but it was nice and filled with a lot of happiness. It was an emotional and heart wrenching day, and although I wasn’t able to cry this year, I got close a couple of times, which was good enough for me. Monday’s a busy day for everybody, so I didn’t have a whole lot of free time on my hands. My family and a couple of my close friends were able to go to my favorite restaurant, Sake (pictured above), which was a great time. And many thanks to everyone that reached out to me. You made that day more special for me.

I thought a lot about the impact that would have been made if things went differently. My family and close friends (less than 100) would have been torn up, that’s for sure. And some general friends/acquaintances (less than 500) also would have been torn up, but for a limited amount of time. There are over 7.1 billion people in the world. That means only about 0.000008% of the population would have been effected at all. With maybe a tiny bit more ever even hearing about it. I’m sure that would be a rough fact for anybody to swallow. But… things didn’t go differently. That WOULD have been the case, but I’m still here. There is still time for me to increase that percentage. Matter a fact, anybody that ever reads this still has time to increase THEIR percentage. On a bigger scale, everyone will have their own unique answer for achieving this goal, but on a smaller scale, the answer for everyone is virtually the same. And that is to gain respect from others. After all, unless people (disregarding family) have some kind of respect for you, they most likely don’t care about you. So as you keep your eyes and ears open for your bigger answer, start small by being caring to the people you interact with on a daily basis. Make sure you will be missed whenever your time comes.